Then and Now: Weathermen Explosion House, 1970

Friday, March 6, 1970, was an ordinary day in Greenwich Village until an explosion blew the front off of an 1845 Greek Revival townhouse at 18 West 11th Street. Unlike some areas of Manhattan, some quite close by, this area of Greenwich Village never experienced a decline during the 1960s and 1970s. Ir remained prime real estate, the home to movie stars and other well-to-do folks, even as the East Village and the Bowery declined. You can verify this by noticing the (charred) tree in front of it, at a time when trees on Manhattan streets were extremely rare and a sure sign of wealth. I came across an image of the explosion, so I thought I would check in on the location and see what it looked like today. So, this is a comparison of 18 West 11th Street, NYC, from 1970 to November 2017. 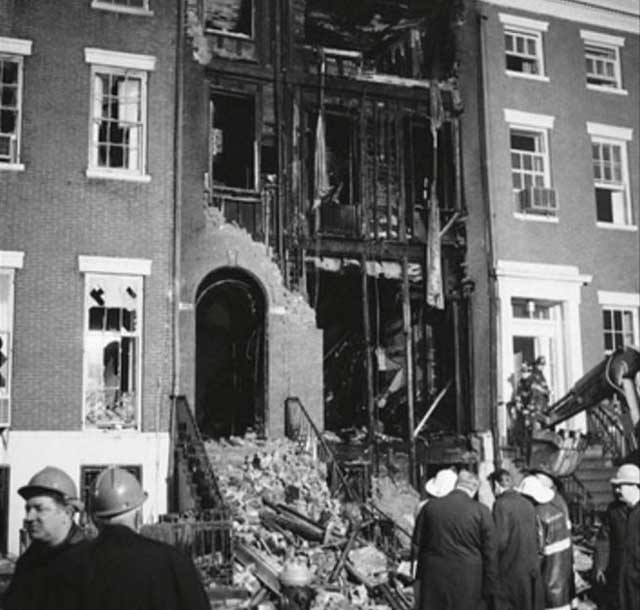 The explosion was caused when members of the underground Weathermen, a radical group opposed to the Vietnam War and The Man, accidentally detonated a bomb they were making in the basement of 18 West 11th Street. Diana Oughton, Terry Robbins, who were assembling the bombs, and Theodore "Ted" Gold were killed by the blast. Two other Weathermen, Cathlyn Wilkerson and Kathy Boudin, survived and escaped in the confusion. They remained on the FBI's Most Wanted List until their captures in 1980 and 1981, respectively. The townhouse was owned by Wilkerson's father, a radio-station executive who was in the Caribbean at the time. Apparently, he had no idea that radicals were using his pricey building. 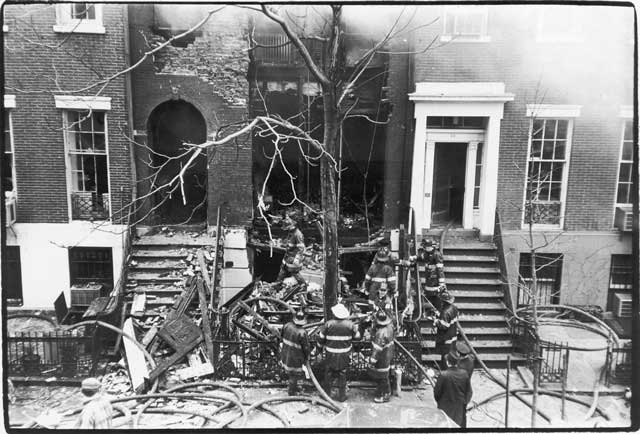 The townhouse was completely wrecked and ultimately razed after a lengthy investigation. The bombs were so powerful that they basically vaporized the two Weathermen making them, but the structure of the house directed the blast in such a way that it barely scratched the two adjoining townhouses.

One of the houses next door was owned by the actor Dustin Hoffman, who immediately became the focus of every news story about the incident. The fact that Hoffman and his wife, Anne Byrne, were able to rescue "three modern paintings and a Tiffany glass lampshade" was almost as prominently reported in news accounts as the deaths and survivors. 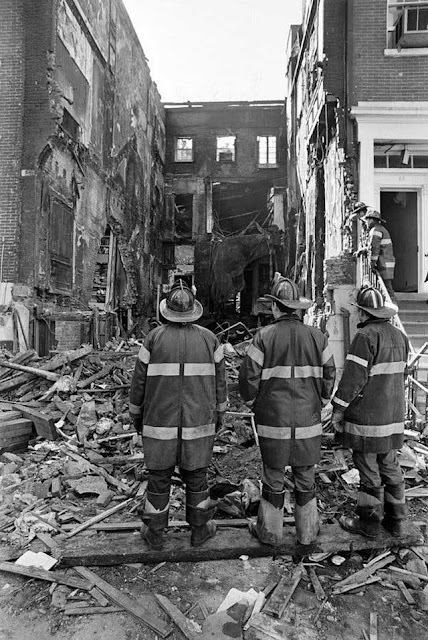 The Weathermen were just one of many radical groups at the height of the Vietnam War. Like the others, it was composed of college students who had no real plans but simply wanted to bring attention to their pet causes. It's even unclear what target they intended to use the bombs against, they just wanted to blow something up. Well, they did, they sure did. 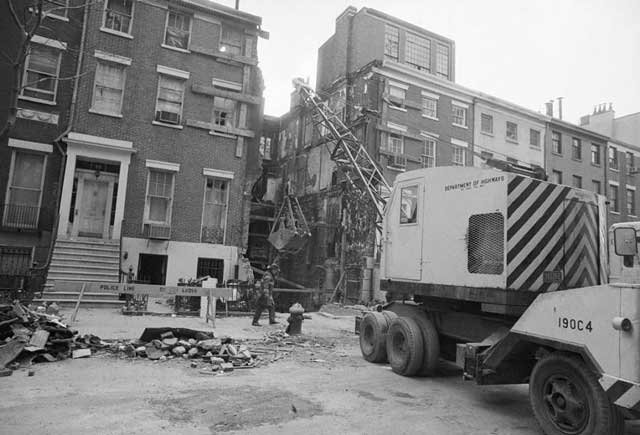 As the photos show, what the Weathermen didn't destroy, the bulldozers finished off. Since the townhouse is in the Greenwich Village Historic District, rebuilding the completely destroyed structure had to go through a lot of paperwork. Finally, in 1978-79, the site was rebuilt by architect Hugh Hardy.

The rebuilt house features an angular "rear facade" (for some reason that is the technical term for the front wall). At first glance, one might assume that the protusion was designed as a sort of memorial to the blast. However, according to the architect, Hugh Hardy, he designed it that way because the fad then was "diagonals." Well, it's certainly diagonal. Whatever the reasoning, the design sticks out like a sore thumb on the elegant block, as if desperate to call attention to itself.

As one could surmise, despite not being a "renowned architect," that the new design hasn't aged well in terms of public acceptance. In fact, almost since the day it was built, people have wished it would be rebuilt more in keeping with its Greek Revival surroundings. Of course, once again, any changes have to go through the Landmark Preservation Committee (LPC) despite the fact that the building itself has virtually nothing left from its 1844-45 incarnation. So, in November 2013, a new owner submitted an application to eliminate the "diagonal" and restore a flat front, er, rear facade.

In what must be record time for the LPC, it approved the renovation within two months, on January 22, 2014. Apparently, they couldn't approve the change fast enough. Believe me, there are people who see that and wince as they reflect on how long it took them to get approval. It's undoubtedly an indication of how much of an eyesore the "diagonal" is. So, that ends our story, the building was renovated, and the dreaded diagonal is no more. Right? Well, not exactly.

As we've already seen, the dreaded diagonal is still there. But what happened with all that LPC activity and the approval of the renovation and, well, everything? Well, that is unclear (this is quite common in situations involving Manhattan real estate). Public records show that the property at 18 West 11th Street has been sold three different times since the LPC approval, most recently (as of this writing) on June 21, 2019. Naturally, the transactions involve LLCs, which means the owner remains anonymous unless he or she or it decides to reveal their identity. So, at last check, the property remains as it has been since 1979, a stark reminder of the events of March 1970.

I hope your enjoyed this entry in our "the more things change, the more they stay the same" series. The world will never forget the tragic explosion at 18 West 11th Street, and apparently will never be allowed to forget the modernist reconstruction. Please visit some of our other pages in this series!