It's the Three Stooges in living color!


Here we present one of the classic shorts, long forgotten by everyone but Three Stooges fans. "Three Stooges at Steel Pier."

This was created in 1938, but it looks much more recent due to the excellent color quality. Color film has been around in one form or another since the early 1910s, but it was very expensive until fairly recently. Thus, the first feature films were not done routinely in color until the 1960s, so seeing an act that had largely disappeared by then in living, vibrant color is a bit of a shocker.

This was filmed at the Steel Pier in Atlantic City. Steel Pier is still there and you can visit it the next time you head to the Jersey Shore. 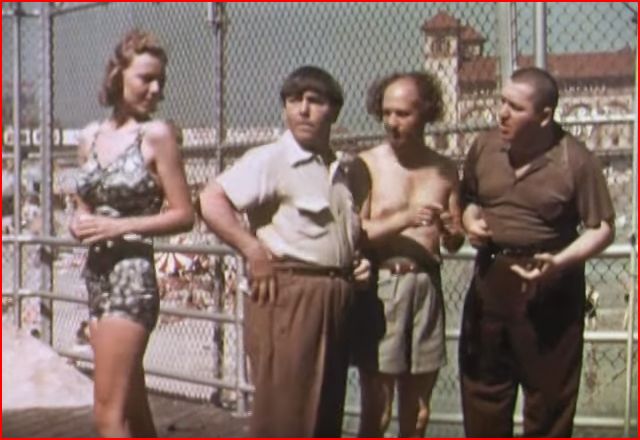 The lady in the film is Barbara “Babs” Bradford (October 17, 1917, in Worcester, Massachusetts - February 3, 1991, in Encino, California). She was voted the most beautiful girl in her high school class, and she began modeling for the John C. MacInnes Co. and other stores in Worcester.  She was voted “Miss. Worcester” in the 1935 beauty pageant.  In 1936 she moved to New York and became one of the top "supermodels" of her day.  In 1937, Barbara was voted the most beautiful woman in New York, and in 1938 she appeared in this film with the Three Stooges. She basically retired when she got married for the second time during World War II, which was quite common then. She retired to California.

Make no mistake, Barbara Bradford was a very big deal. She was often seen in the company of big shots of the day such as Alfred Bloomingdale and the like. Maybe the Stooges and the Mann/Bradford team just happened to be in Atlantic City at the same time and decided to do a quick one-off on the pier. It doesn't look like a tremendous amount of time went into this, maybe a couple of hours one afternoon. A couple of hours spend back at the shop editing and adding background music and - presto! - instant classic short.

George Mann also appears. He was part of a successful vaudeville comedy team, Barto and Mann, kind of the Martin and Lewis of his day. Mann and Bradford were married when they did this short, but divorced five years later. Barbara was going by Barbara Bradford Mann at this time and later became Barbara Bradford Smith. George was known for taking many pictures and home movies of his stylish wife, so this production likely was his idea.

The music is by Abe Lyman and his orchestra, recorded in 1928. The track is "A Jazz Holiday."

The basic plot is that the boys try to hit on a beautiful dame, but the dame hits back - until she doesn't. This was some kind of experimental or home film, as aside from the musical track, there is no sound - but it is constructed so that it doesn't need sound. One could almost say that it is a color production from the silent film era, a true rarity, though, of course, the actual silent film era had ended by 1930. Adding voices and such probably would have expanded production costs beyond the point where it would have been feasible, especially considering the ocean noise.

Note the people on the beach watching and taking pictures. Also, a mother and young child get in the frame at one point (maybe the kid is still alive?), as do some other passersby. Everyone must have just decided to go down to Atlantic City and film a quickie short, and then hit the bars. While this was decades before legalized gambling, Atlantic City in the '20s and '30s was known as the vice capital of the eastern seaboard both during Prohibition (which was long gone by this point) and afterward - and the boys, who were Brooklyn natives, would gladly have taken the chance to have a nice working weekend down there to do a little filming and take in the sun and other attractions.

Posted by James Bjorkman at 8:16 PM