The Flatiron Building, originally (and only officially) called the Fuller Building after a real estate company that owned it, is located at 175 Fifth Avenue in the borough of Manhattan, New York City. It was built in 1902 by Daniel H. Burnham, an architect of the Chicago school.


First, A Little History About the Flatiron Building

There are certain intersections in New York City, of which Times Square is the most famous, where Broadway crosses across at an angle. This is because Broadway predated the 1811 grid pattern imposed by urban planners on Manhattan Island north of the then-developed areas in the south. The urban planners decided to keep the existing streets and build the new grid pattern around them because Broadway was known at the time as the Bloomingdale Road.

It was considered smart to keep the Bloomingdale Road because it was well-established, was the main road to New England, and the areas of Manhattan that now are known as Midtown and the Upper West Side weren't going to be developed anytime soon anyway (they were basically undeveloped farmland at that time aside from outposts on Broadway and a few other scattered locations). That led to diagonal lots such as the one now occupied by the Flatiron Building. Land always being so precious in Manhattan, owners put it to use even though that meant erecting buildings that had diagonal shapes. The Flatiron Building is the most famous of those buildings, but there are several others. Some other oddly shaped buildings resulting from this situation are at Times Square, Columbus Circle, and Verdi Square (West 73rd Street), but there are others as well.

The original site of the Flatiron Building had a building of a similar configuration, but the Fuller Building was on a completely different scale. Among the tenants on the site were the Erie Railroad offices (which had been there for decades), Wells Fargo, a dentist who used 'painless methods,' a chiropodist, a manicurist, and, behind it, a dealer in oriental rugs.

The top of the low-slung building there was prime advertising space, much like the north side of Times Square later would become.

The dates of early pictures taken of the Flatiron Building are sometimes hard to pin down.

However, the site, which had a low-slung professional building on the location, was cleared for construction around 1901. The building itself was completed in 1903.

The Flatiron was the subject of a lot of classic shots shortly while it was being built. You always had the standard distant, tree-lined shot with the hansom cabs, the ladies walking by, and a peekaboo shot of the Flatiron itself in the distance.

The 23rd Street area was the center of city life at the turn of the century. It was like 42nd Street is now. It was an area for women to promenade and men to offer them a ride.

There was a gentility that was enhanced by the elaborate fashions of the day. 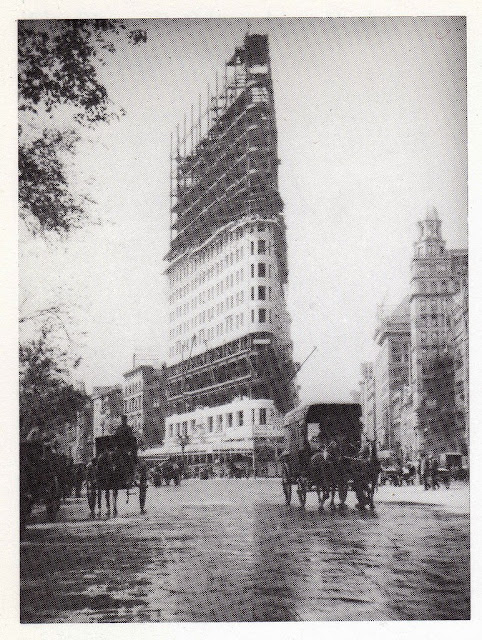 Many professional photographers were located nearby (note, for instance, the signs in some of the shots).

This was unusual because there weren't that many photographers at all in those days. Remember, though, that "Hollywood" was just a few blocks down on 14th Street then and would be until 1911.


The technology was still fairly new, and the new building was a perfect showcase for their abilities.


Around the time of World War I, the intersection of Broadway and Fifth Avenue was one of the city's great centers. The victory parade for World War I focused on the square, which is so massive that they were able to erect temporary columns and a wooden victory arch as in Roman days which the marchers could pass through.

Thus, we are fortunate to have a number of early photographs from the earliest days of the Flatiron. 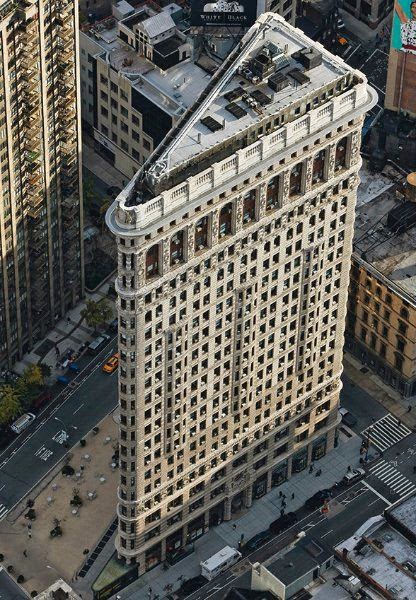 It sits on 23rd Street at the base of Madison Square Park, which used to be a much bigger deal than it is today. The park and surrounding area have revived recently and the Flatiron District has been "hot" in real estate circles.


Compare the Stieglitz photo from 1903 from the recent one below.

The Flatiron (as everyone calls it) is considered to be a groundbreaking skyscraper. Upon completion in 1902, it was one of the tallest buildings in the city and one of only two skyscrapers north of 14th Street.

My apartment is about 8 blocks south of the Flatiron Building, located in the neighborhood named for that iconic structure. 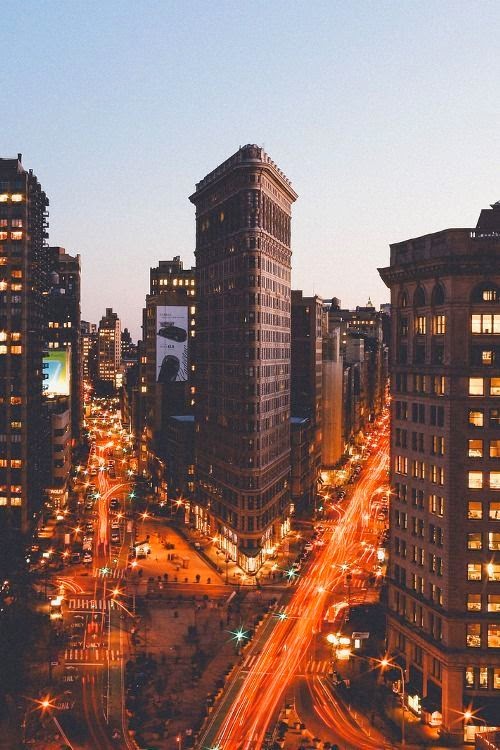 The Flatiron is one of those buildings that will catch your eye even if you've walked past it a hundred times - which I have.

My most interesting walk by it, though, involved the little-known (by outsiders) statue of General Worth just north of the Flatiron, in the intersection with Broadway. This happened during the ricin scares of the early 2000s. A cop had his back to me and was scooping up some white powder at the base of the statue. No barriers there, just the cop and the powder dumped beneath the statue of the General.

He suddenly turned and shouted at me excitedly to get away, because it might be ricin, and when I didn't run screaming out into the middle of traffic seemed a little perturbed. All I can say is, in New York City, you take stuff like that in stride. I'm still here, so I guess it wasn't ricin. Could have been.

I've always been curious what it is like in the offices situated closest to these shots, the ones with the narrowest width.

New Yorkers, especially from the neighborhood (of which I am one), tend to think of the Flatiron Building as that big hunk of rock to get around at 23rd Street, where there is an express stop on the subway and a key transfer point.

However, it is more than that, it also is a symbol of the entire midtown south area, though because of the preeminence of the Flatiron Building as an iconic landmark, an entirely new designation for its locale - the Flatiron District - has come into use. 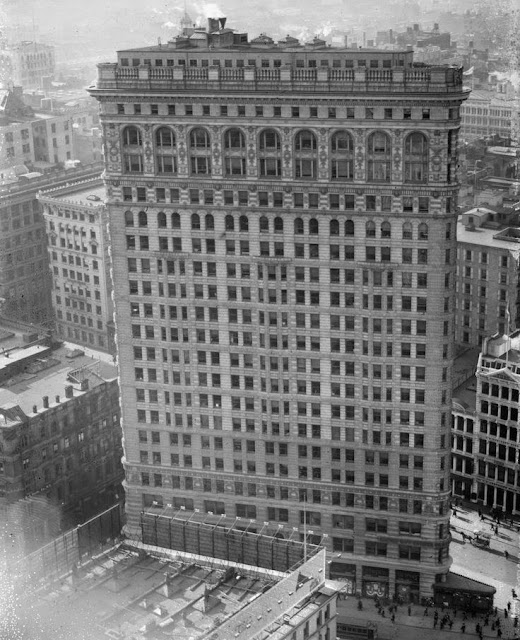 We don't spend a lot of time looking up at it except when walking down 5th Avenue towards it.

The most interesting aspect of the intersection is Madison Square, which opens up and provides some relief from the walls of stone and metal much like Grand Army Plaza at 59th Street. But it is somehow comforting that the Flatiron is always there, unchanging, providing a visual reference point where Broadway and 5th intersect. It turns an otherwise nondescript and unremarkable intersection into something iconic. 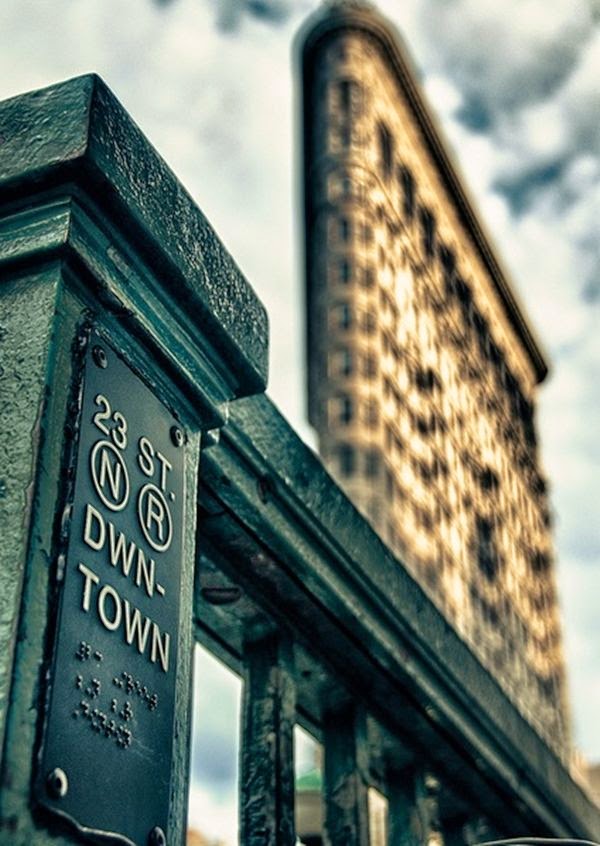 Probably pretty cool to work in there. Some of the offices must have interesting shapes.

The 1990s television series CPW was set in this building, but I highly doubt it is as spacious inside as the series made it appear.

Probably the most fascinating thing about the Flatiron Building is a simple fact that it hasn't changed. In fact, it's surroundings haven't really changed, either: you still see the same trees, the same streets and, the same intersection, the same dark figures rushing through the cold and gloom. You can even imply the horse-drawn cabs into today's scene, though they now are relegated to Central Park (and soon probably not even there). The Flatiron is like a security blanket always there, always imposing, never really intruding. Just... there.


The Federal government was looking for ways to put people to work during the 1930s, and photographer Berenice Abbott was happy to oblige. She proposed 'Changing New York,' her grand project to document New York City, to the Federal Art Project (FAP) in 1935. The FAP was a Depression-era government program for itinerant artists and workers in connected fields such as advertising, graphic design, illustration, photofinishing, and publishing. A changing staff of more than a dozen participated as darkroom printers, field assistants, researchers and clerks on this and other photographic efforts. Abbott's efforts resulted in a coffee-table book in 1939, in advance of the World's Fair in Flushing Meadow NY. It had 97 illustrations and text by Abbott's fellow WPA employee (and companion), art critic Elizabeth McCausland (1899-1965). The FAP distributed complete sets of Abbott's final 302 images to high schools, libraries, and other public institutions in the metropolitan area, plus the State Library in Albany. Throughout the project, exhibitions of the work took place in New York and elsewhere. The founding of the National Endowment of the Arts in 1965 (during the next New York City World's Fair) was an extension, at least in spirit, of the FAP.