Travel Back in Time to Colorful 1890s Paris

France was a center of filmmaking in the 1890s, and here we have some film from 1896-1900 that has been revived with modern software to meet our present-day standards. Cameras were bulky then, so they would be positioned in one spot and the cameraman would crank a handle to make them work. So, you don't get many action sequences unless the camera was mounted on a boat or vehicle. Fortunately, we do get some interesting shots in this batch of clips because Paris was quite a lively town. The film is spectacular. It really brings the past to life. Oh, as a special bonus, immediately below is an expanded version of the above video that shows color scenes from other cities during the 1890s as well as Paris. Maybe you will agree with me that this is spectacular footage of a time when color footage seemed impossible.

Okay, on with our discussion. 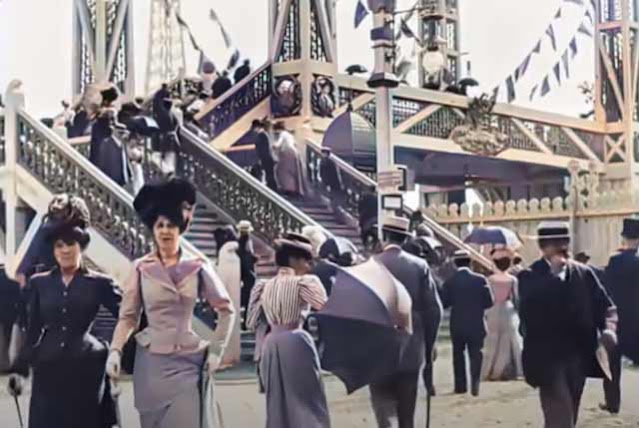 The restoration really brings out the high couture worn by everyday women on the streets of Paris. It is easy to understand why women overseas waited anxiously for the "latest fashions from Paris." Women in New York City during this era generally wore formless and severe black dresses, quite unlike the fancy and colorful attire of  Belle Époque-era Paris.
As you can see, the Avenue des Champ-Elysées was a wild affair in the 1890s. Huge carriages pulled by half a dozen horses carried ten or more people on top, while bicyclists darted around them and hoped they didn't fall off under the horses' hooves. You will notice a two-speed moving sidewalk. That was the Rue de l'Avenir ('Street of the Future'), a 3.5 km long moving walkway designed as an attraction for the Exposition Universelle of 1900. It was designed in 1893 by American engineers Schmidt and Silsbee and installed on a seven-meter-high viaduct made up of three platforms, two of which were movable. The slower one was going at a speed of 4 km/h and the second at 8 km/h, both rather brisk paces for 1900. In 1888, futurist Edward Bellamy published his novel "Looking Backward: 2000–1887" in which he prophesied that these types of sidewalks would be the highways of the future. Apparently, the Parisians took him seriously and set up this demonstration project. 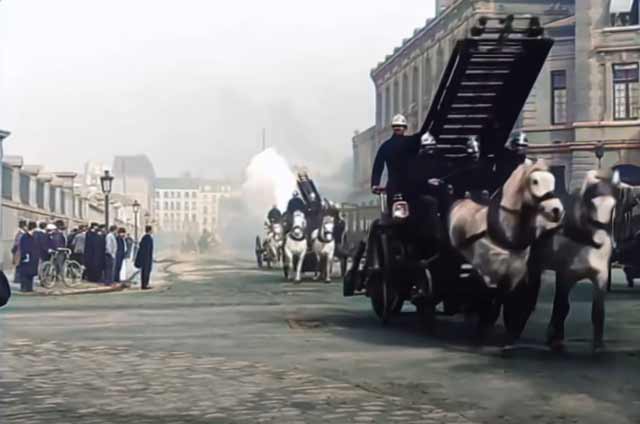 Firefighters apparently out on a drill, their wagons all pulled by stately teams of white horses. Everybody is very respectful, anyone's home could burn down at any time in those days. 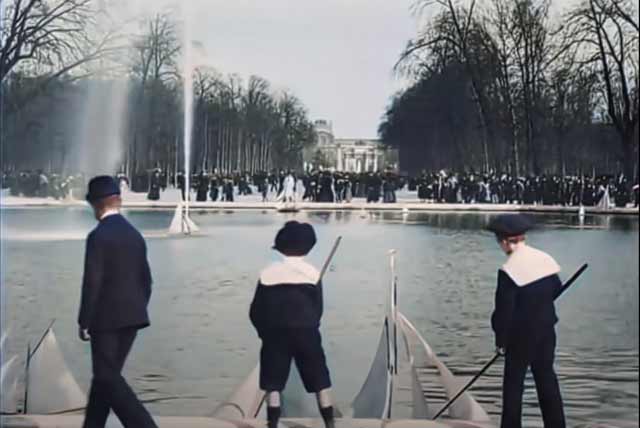 The boys playing with boats are at the Jardin du Luxembourg. The boat-rental concession there began about 1881 and remains in existence to this day.
Anyway, it is a fascinating treat to travel back through time and see a world that no longer exists. You may be interested in other classic old films of yesteryear, most in color:
1920s Paris Cafe Society
1890s Children in Color
1925 Dordrecht, Holland
The 1902 Flying Train of Wuppertal, Germany
San Francisco in 1906
Vancouver in 1907
New York City in 1939
Hollywood in 1931
New York City in 1911
2021
Posted by James Bjorkman at 2:19 PM No comments:

Email ThisBlogThis!Share to TwitterShare to FacebookShare to Pinterest
Labels: 1890s Paris, Eiffel Tower, Moving sidewalk, Paris of the Past 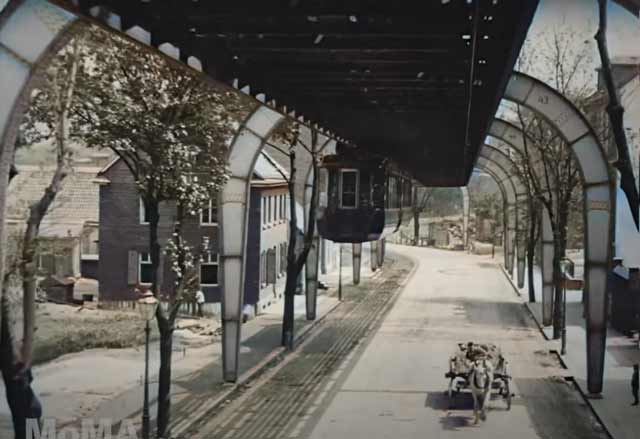 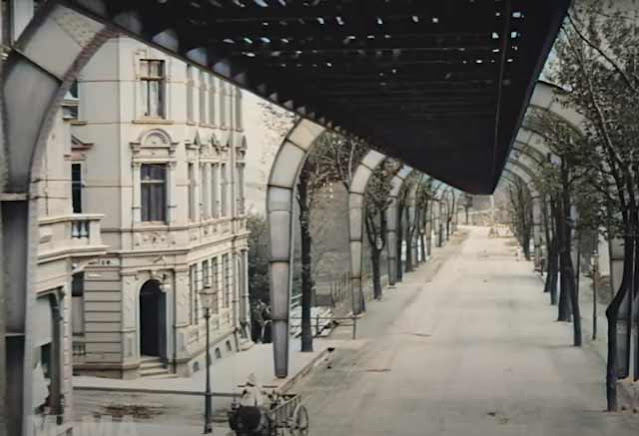 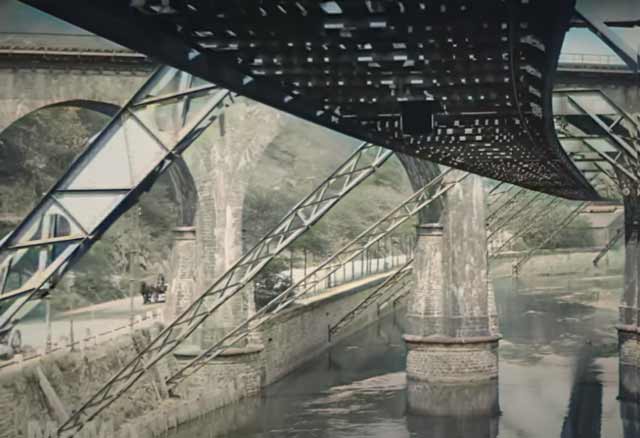 Swedish company Svenska Biografteatern visited New York City in 1911 and took some footage that has survived. While it was not color film, modern technology can supply that well enough. What you see on this page are original images from 1911 that have been processed to bring them up as close as possible to modern standards.
In 1911, the film industry was just beginning to transition from the neighborhoods shown in this film to Hollywood, California. A good cross-section of Manhattan is shown, including the Williamsburgh and Brooklyn Bridges, the Flatiron Building, the docks down near the South Street Seaport, cars, and horse-drawn wagons jostling for position on crowded city streets, Greenwich Village, Herald Square, elevated subways (which were just about to be sent underground), Times Square, paddlewheel steamer Rosedale (sunk on 16 July 1912 off Rockaway Beach), and many other sites. 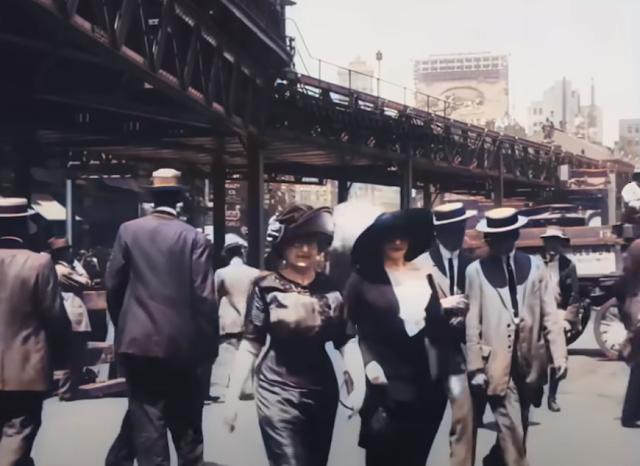 If you love history as I do, you may find this film quite evocative of a time long gone. 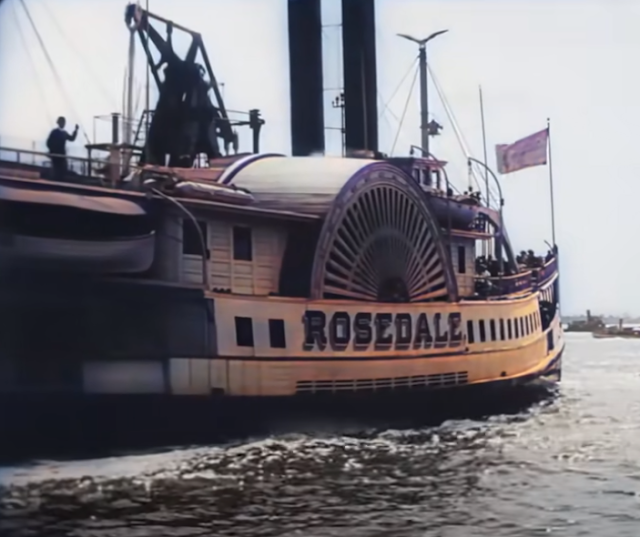 The paddle-wheel steamer Rosedale, which appears briefly in the film, was a regular passage between Manhattan and Rockaway. It sank about a year after this film was taken in a collision with a larger ship.
If you enjoy history as much as I do, you may find this film to be quite evocative of an age long gone by. I also have some classic footage of:
San Francisco in 1906
1896 Children in France
Vancouver in 1907
New York City in 1939
Hollywood in 1931
The 1902 Flying Train of Wuppertal, Germany
Dordrecht, Holland, in 1925
Paris in the 1890s
2020
Posted by James Bjorkman at 12:34 PM No comments: