Then and Now: "The House On 92nd Street" in NYC

I love old Hollywood black-and-white films. They give a different perspective on life, one unaffected by modern issues such as the Internet or even in many cases television. Of course, they had their own issues to deal with and we can see how people confronted them. Hollywood motion pictures have been excellent at preserving ordinary street scenes from the past. However, often this resource is overlooked for a variety of reasons, such as the plot of the film being unpopular or the film stock being of poor quality. "The House on 92nd Street" (1945) incorporated some location shooting of areas of Manhattan that now are interesting to those who enjoy looking into the past of New York City. Here, we have a comparison of scenes from "The House on 92nd Street" from its filming in 1945 to 2017.

Some establishing shots in "The House on 92nd Street" have little to do with the plot. For example, there is a nice view of Bowling Green in lower Manhattan. That building now is the location of many offices, including the Museum of the American Indian.

The small park at Bowling Green has been greatly expanded since World War II. This is a change that has taken place throughout the city. For instance, traffic during World War II used to run under the Washington Square Park arch. Now, the park is purely for pedestrians. 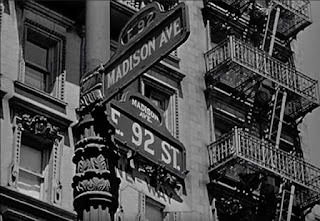 The corner hasn't changed much over the years. However, the evocative fire escapes are gone.

The film pans down slowly across the entire building when it is first "introduced." I guess you have to actually show the entire house if you are going to call your film "The House on 92nd Street."

The location of the spy ring, disguised as a women's clothing store, was shown in "The House on 92nd Street" only once (aside from incidental views of people entering and leaving the building and so forth).

The building used wasn't actually on 92nd Street at all, but it was close by. In fact, the building shown in the film was exactly one block north at 53 East 92nd Street.

Why they changed the location isn't clear. However, a look on Google Street View now shows that the infamous (because of the film) house on 93rd Street where much of the spy action takes place is long gone. Its spot now serves as a back entrance to Carnegie Hill Tower at 40 East 94th Street. Carnegie Hill Tower was built in 1984, so the five-story house shown in "The House on 92nd Street" has been gone for at least that long.

In the 1950s, the large white building that was seen behind the memorial to Christopher Columbus in"The House on 92nd Street" was torn down and replaced by a hideous convention center. That lasted less than 50 years and since has been replaced by a somewhat more attractive complex of buildings. The park around the memorial has been expanded, but traffic still flows around it. 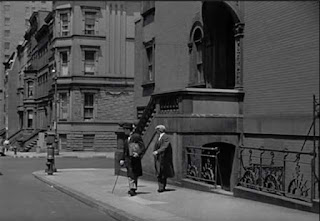 The houses on either side of the eponymous "The House on 92nd Street" are still there and look pretty much exactly as they did then. The same railing that was in front of them remains, though the railing in front of the house for which the film was named was removed whenever that house itself was torn down. If it ain't broke, don't fix it, right? And those are beautiful, upscale homes which have benefited from the growing desirability of the Upper East Side for the wealthy.

So, while the house that "starred" in "The House on 92nd Street is long gone, the area itself on 93rd Street otherwise is little changed. I hope you enjoyed this entry in this entry of our "the more things change, the more they stay the same" series. If you enjoyed it, please visit other entries in the series!